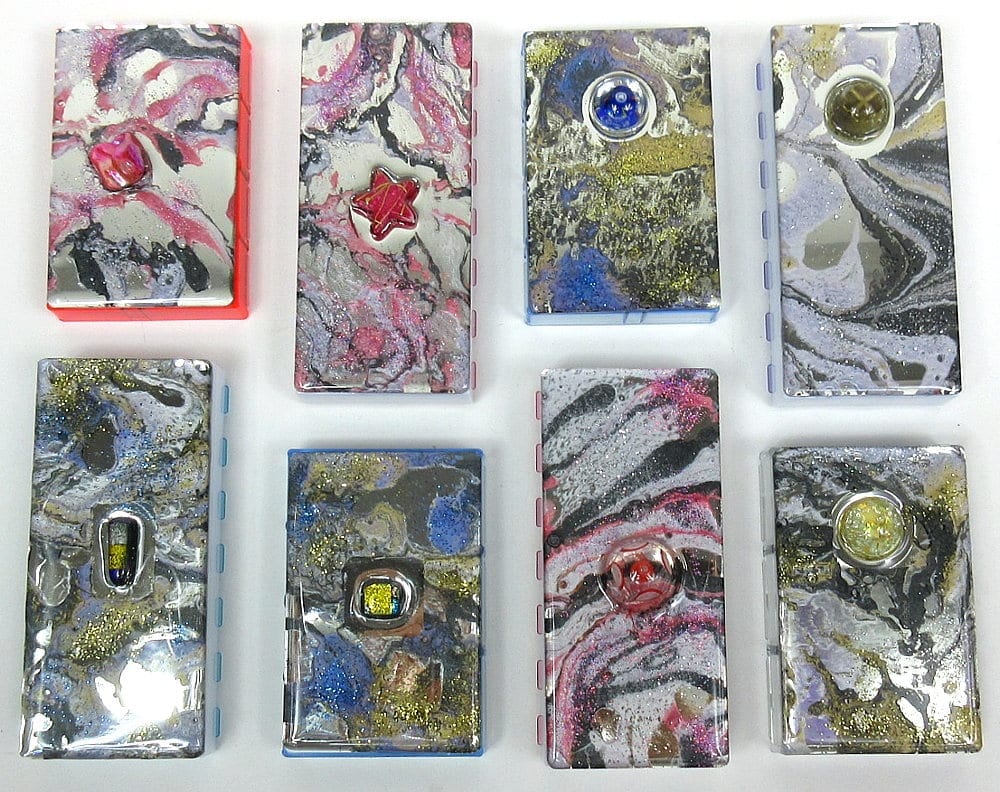 Water marbling lately has been intriguing me, as I could imagine its use on the glass tops of my decorative multi-day pillboxes. The above eight 7- and 14-dose pillboxes are the result of my experimentation, which I will detail in this post.

Traditional water marbling on paper is typically done by creating a gel layer, dripping colored ink or paint onto it, swirling the colors to mix them, dipping paper onto the surface of the liquid, and letting the paper dry.

Other methods employing plain water, instead of the gel, came to my attention via various YouTube videos and other sources. The first method I noticed was floating nail polish on water and dipping fingernails into the paint to color them with marbled effects. I have a ton of various color nail polishes in my stash, so I tried this first.

For my test surfaces, I cut eight mirrored tops for two sizes of pillboxes. I was worried that the paint might fully cover the mirrored surface, so I cut circles, ovals, and rectangles out of clear adhesive-backed shelf liner and stuck them onto the mirrors to mask out areas of the mirrors. I also adhered long strips of clear packing tape lengthwise to the back sides of the mirrors and folded over the ends of the tape to use as handles during the dipping process.

Next, I tried diluting acrylic paints to float on the water surface, but they didn’t float. More cleanup ensued.

Undaunted, I decided to try my Pebeo Fantasy enamels. I used a pipette to apply the paint to the water surface. These paints did float, but they came out of the pipette in spaghetti-like strings. Some stayed in string-like form, and some spread over the water’s surface. I used three different colors (black, silver, and gold) and stirred them a bit with a wooden skewer, but held off on the stirring when I noticed the paint was covering most of the water’s surface.

I proceeded to dip the mirrors face down into the water. The paint stuck to the mirrors and dragged most of the rest of the paint down with them as the mirrors were submerged fully and then quickly pulled vertically out of the water by one of their two handles. The design was captured on the mirrored surface, but the paint had wrapped around to the mirrors’ backsides, and many water droplets still sat on top of the design. I set the pieces aside to dry on silicone racks. I was afraid to touch the mirrors when the paints were still wet.

After cleaning up the basin’s water and stirring together three more paint colors (black, silver, and blue) on the water’s surface, I dipped three more mirrors in the same manner as before, adding more paint between dippings.

I repeated this process using three different colors together (black, silver, and pinkish red)  on three more mirrors and set all the tops out on silicone drying mats to dry over night.

The next morning, I discovered what I had left to do with these creations. Some of the adhesive masks had curled upward on one edge during the dipping process, so when I pulled them off the glass, one edge of the masked area did not have a clean edge. I pulled the packing tape cleanly off the backs of the mirrors and wished I had used that type of tape for my other masks. The enamel had dried in drips on the back side of the mirrors, so I scraped off the high points with an Exacto knife. Then I cleaned off all the edges of the mirrors, right down to the glass.

Next, I tackled the mirrored surfaces of each piece. I used the Exacto knife and mineral spirits on a Q-tip to clean up the ragged edges and centers of the masked areas. The silver enamel, which I had used on all the mirrors, had spread to leave a thin film on most of the other parts of the mirrors, so I used the Exacto knife and mineral spirits to painstakingly clean off many of the larger areas of thin silver paint to expose the mirrored surface. This was fairly time consuming!

When this work was done, the pieces looked much better, but they still lacked the “wow” factor I strive for in my works. I set them aside to cure for several days while I found and glued on dichoric glass or resin cabochons to enhance each design.

After that glue had cured for a day or so, I strategically added complementary colored glitter to the surface of each mirror and topped that off with a layer of self-doming clear jewelry-quality resin. That layer was needed to float the glitter, protect the enamel layer, and add considerable depth and sparkle to each piece.

When the resin had cured for a few days, I glued the mirrors onto their pillbox bases and let the glue cure for 24 hours. The results had the dazzling beauty I was hoping for, especially when viewed in direct sunlight. 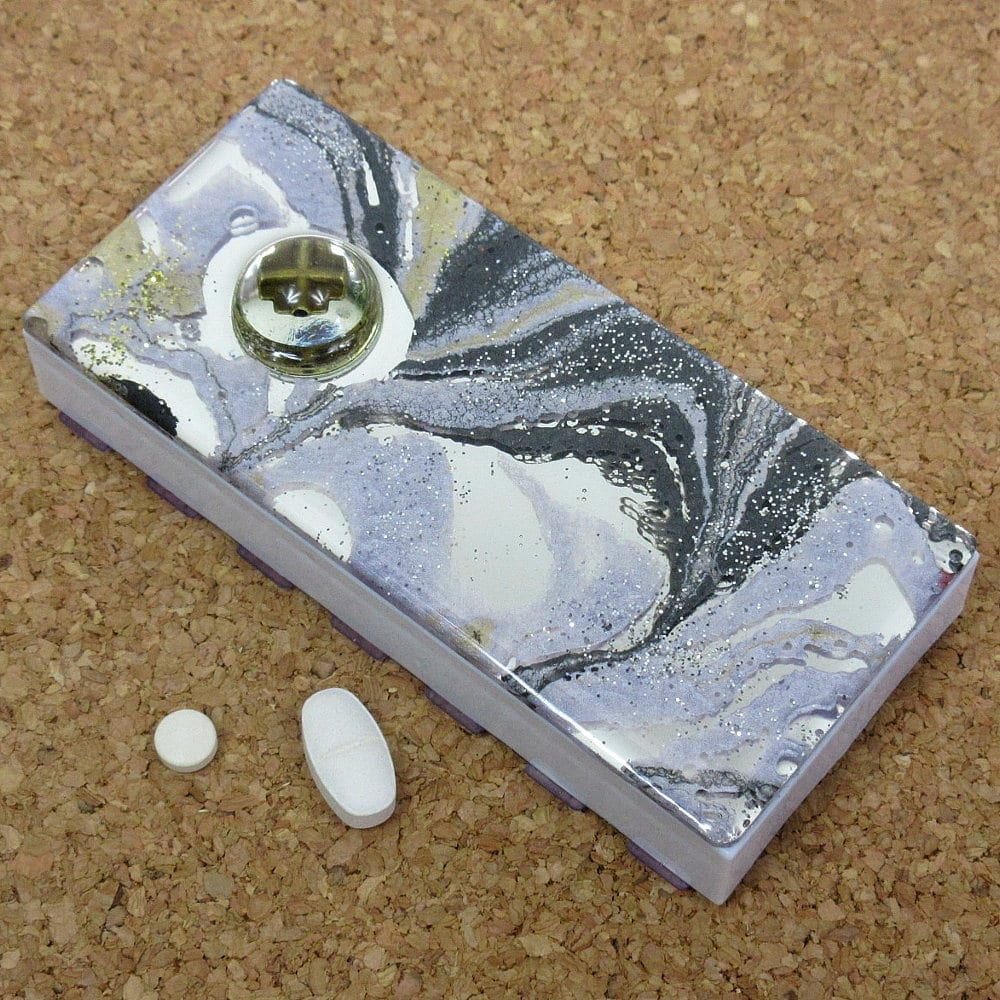 I’ve posted these “splash” pillboxes for sale on my website. Just put “splash” in the website’s search box, and you’ll see them all. Given the above-described considerable effort put into their creation, their prices are a real bargain!

I learned a lot via these experiments. I’ll definitely be applying what I’ve learned to future experiments with water marbling, so be on the lookout for more works along these lines. Please leave a comment to tell me what you think of these.

END_OF_DOCUMENT_TOKEN_TO_BE_REPLACED

Facebook Twitter Email Pinterest
I love making earrings! This new batch features some nice ones. Prices are very reasonable, and they're just in time for Christmas gift...

END_OF_DOCUMENT_TOKEN_TO_BE_REPLACED

Facebook Twitter Email Pinterest
Which is the loveliest pillbox of all? My latest batch of 15 new decorative pill organizers makes answering that question a definite di...